We first come across George when he marries Sarah Barnes in St Peter’s Mancroft parish in Norwich in 1780. He is stated as being ‘of this parish’, and dies in 1831 listed as being 72, so born c 1759. There is no trace that we have found of a George being born around that time in Norwich, and the only George we have born around then is George 3305 in tree #022 in Barningham Town, about 20 miles away.  The answer may lie in the Overseers Accounts for either of those parishes, which may show a record of his settlement between the parishes.

Lettice was also baptised in 1784, but there is no burial between 1781 and 1784, so we can only assume this is just a second baptism where she is received into the church publicly.

Sarah nee Barnes died in 1794, and it looks like George then married Frances Gorem in 1797.

Frances is likely to have been related to Augustine Gorem, who married Anne 4244 in 1804. Anne would have been about 14 when Frances came into the family, so this would be an easy way for them to get to know each other.

Lettice and James Golding had several children, one of whom was George Gotts Golding. He worked for W Cubitt & Co, as an engineer, and in 1856 he had a patent granted for a new type of steam boiler.

This is recorded in the British Library and the first sheet is shown below: 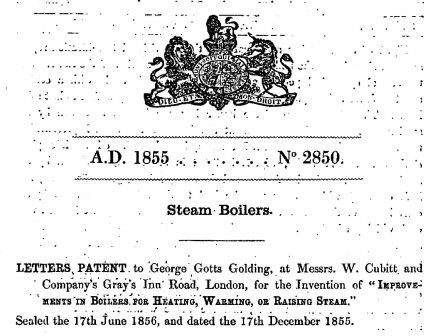