John Benjamin Gotts rose through the HMSO to become the Assistant Controller. There he picked up the International Service Order (ISO) medal, and an OBE, both of which appear in his entry in the telephone directories.

He married Gertrude Bertha Gower in 1904, but they do not appear to have had any children. 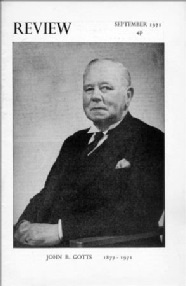 This image appeared in the HMSO in-house magazine on his death. It is probably from when he received his Imperial Service Order medal, basically a long service award for senior civil servants.

CW Blundell joined HMSO at the same time as John and has published this book containing several insights of John. The most poignant is this one:

“One of my own senior officers (who never referred to J.B.Gotts as anything else but John Bloody Gotts!) told me of a case concerning a warehouseman who wished to visit his wife in hospital, and who was therefore advised by his supervisor to apply formally for the time off to do so. Such permission could not be given locally, and, incredible as it may seem today, needed the approval of Gotts himself, the Establishment Officer - the head of the Establishment Division responsible for discipline, conduct, pay and wages, conditions of service, accommodation matters, and performing as the 'conscience' of the Department.

The approval presented no difficulty, it seems; but Gotts noticed that the application was written on what appeared to be scrap paper as issued to offices for rough work. The man was sent for, and confronted with this suspicion. Yes, it was a sheet of paper torn from a scrap pad in the warehouse where he worked. "You must know" said Gotts "that an application to further your private requirements has to be made at your own expense - therefore on your own paper. To have used Government property for your own ends is theft. You are discharged".

Now this was in the early 'thirties, when a man out of a job was likely

to stay out of work for a long time. Never mind his sick wife; never mind any mitigation; never mind the triviality or the circumstances. Gotts saw only a misuse of property; and sacked him! What sickened my informant even more was that Gotts went from that interview straight into an Office prayer meeting - he held prayer meetings daily for any staff who cared to attend and led them himself - with what the said informant feelingly described as "a fine example of bloody Christian charity".

Continued on next page

More quotes from the book are contained here